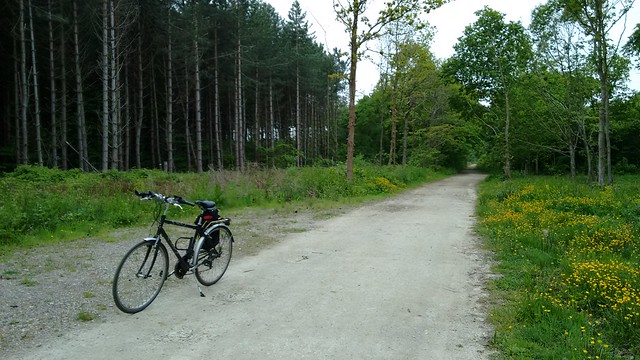 Even though these woods are less than 3-4 miles away from my house (perhaps even less if I take the nasty B2205) I had never been there until today! Given the episode I had a couple of days before I wanted to go out but do something low-impact on the knee. Cycling there was quite nice, it is basically flat the whole course, although quite bumpy (and having the tyres inflated to almost 6 bar does not help). The bike did quite well, all things considered – and it was nice seeing so many people cycling along these bridleways and forest tracks, even on a grey-ish day like today. And happy to report that the knee is doing fine! Soon I should be able to get back to my sculling and to my runs as well. 🙂 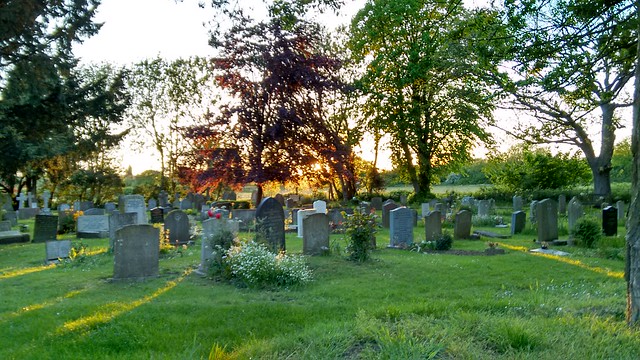 Yesterday as I was heading home I came across this scene – the sun was quite low in the horizon (~8:30 PM) and the last rays of sunlight of the day were streaming through the branches and hitting the tombstones in this churchyard (which I have covered extensively in the past). I slammed on the brakes of the bike and hurried to take a quick shot with the cameraphone (a shame I didn’t have the DSLR with me at the time, but that is quite an heavy beast to carry around! 😛 ).

I will definitely miss this commute whenever I move out of Canterbury! (even in wintertime when it is dark and eerie, cycling by the churchyard with the tombstones illuminated by the blueish moonlight, it still has some appeal…)

This morning I was in for a treat – a bright mildish (not too warm, not too cold) morning with absolutely zero wind! Obviously I had to head out to the boathouse under these circumstances 🙂 . By the time I got there (at about 06:30 AM) it was already very, very bright – it makes the dark days we have in Winter around here a bit more bearable when you know that by this time of the year it gets this nice! 😉 . 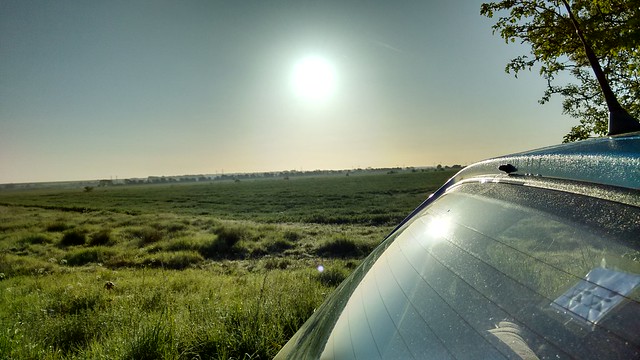 Look at the lack of rippling from the water – it is a perfect mirror! If it wasn’t for the frequent logs and bits of garden waste that are quite frequently present in the river it would have been an absolutely perfect training session this morning. 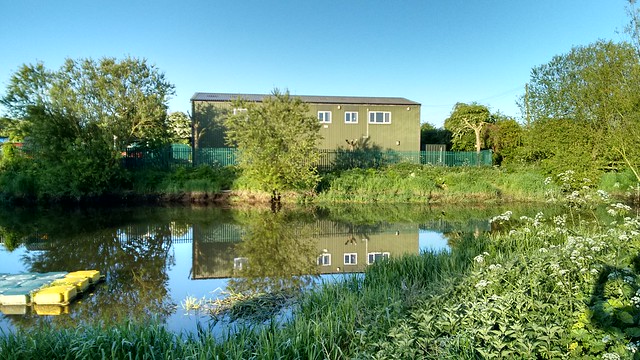 (and yes, the HDR feature on my phone works really well, I have to say! No way I could ever get these images on a single frame acquisition…)

Last week it was Election Day! All over the UK people voted for the General and Local Elections, with the polling stations opening at 7 AM and closing late at night (10 PM). Definitely a few differences from back home, where the elections are always on a Sunday and there are a few weird historic laws regarding them (such as prohibiting people from hunting…). And, perhaps more interestingly, the local elections are open for participation not just to UK citizens but to anybody who is legally in the country, such as EU citizens.

The mechanics of the local elections are also quite strange, I have to say… you don’t vote for a specific candidate who might head the council for a few years; instead, you elect a few people of your sub-region (in my case it included a few of the villages nearby) who will between themselves (and the other elected councillors from other areas) decide who is heading the council. Due to that, things like the image below are simply not there, and I have to say that my local councillors did not actually campaign that much – I did get quite a few leaflets regarding the general election, though! (I’ll leave the general election for a future post…)

Perhaps not surprisingly, Canterbury maintained the Tory-dominated council from previous years. Actually, practically the whole of Kent is Tory-dominated, council- (and MP-) wise; apart from Thanet which now has a UKIP local council and Maidstone (Labour) , everything else got the Tories. And as for me, I can’t say I could make an informed choice regarding the local elections given that I had scarcely any information regarding the candidates or their manifestos. Very strange indeed!

Race day! Yesterday it was finally the day both myself and my fellow colleagues whom I have been coaching were waiting for – the Whitstable 10k run! We did ok, the main goals were accomplished and we had a lot of fun with everybody cheering us on the way!

And to top things the race was followed by a nice BBQ party at my place – summer is coming, definitely!

Again, this photo of the day was actually not taken by me (because I feature in it), my thanks to the guys from the Romanian Social Club (in Canterbury) for taking it! 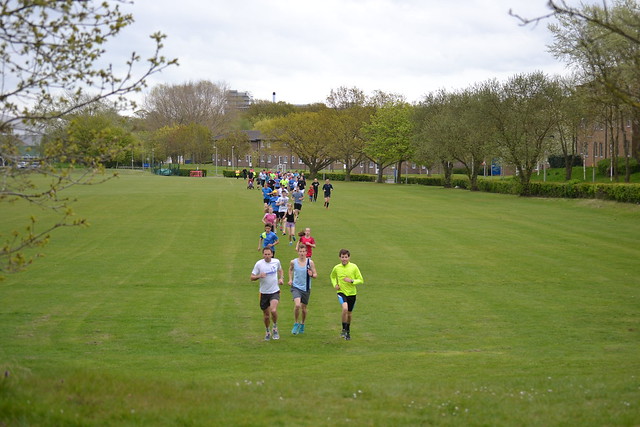 Today the “photo of the day” is not actually mine because I’m featuring in it! 🙂 I’ve been doing these parkruns in Canterbury on and off since January (and when I say on and off I really mean it, as we are already in May and this is only my 5th parkrun!), they are a wonderful opportunity to do a high intensity training (timed 5k run at maximum speed, with 4 hills to conquer!) and meet interesting people too. In this particular occasion I managed to beat my PB and lowered it to 20:27. One of my goals for the year is to go under 20′  – but that is going to be painful as I have to sustain an average of 04:00/km throughout the 4 hills in the course! 😀

I really like this photo because not only I’m having a half-decent expression and my running form is actually not that bad, but you can see the sense of fun and quirkiness that goes in these events – indeed that is someone pushing a buggy down there! (we actually have two regulars doing that every Saturday!) We congratulate ourselves at the end, smile a little bit for the cameras and get cheered by the fantastic volunteers along the course (I will volunteer soon too, I really need to give back to the community!).

Can’t think of anything better to celebrate my 26th birthday than to go out on a sculling boat at 6:30 AM! The weather was absolutely gorgeous, I have to say… 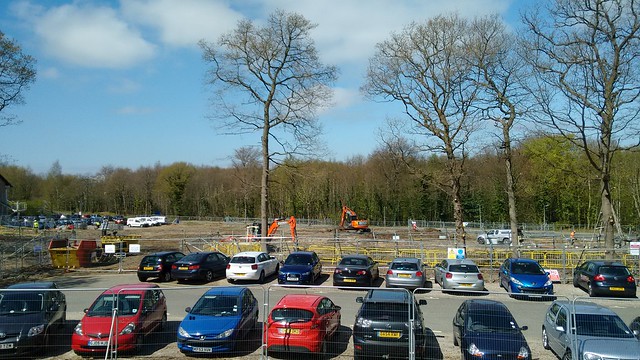 The construction of the new building across the road is finally taking off! Digging the foundations now… 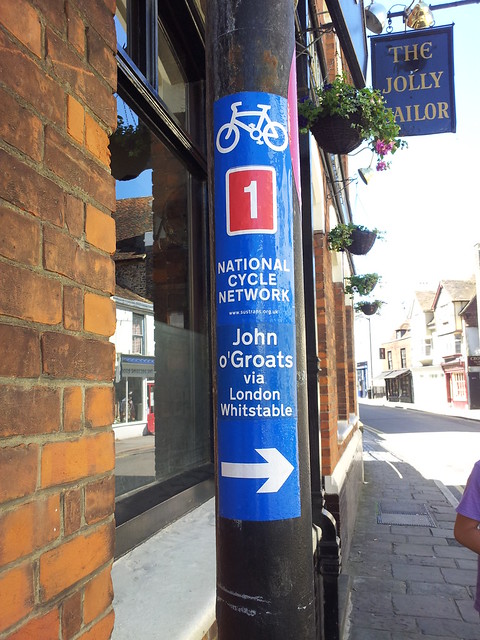 If you fancy cycling all the way up to Scotland, all you have to do is to follow these signs! 🙂 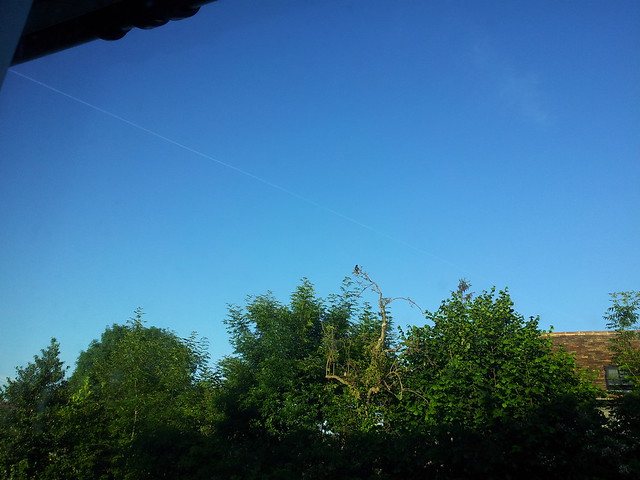 This is the view I had from my bedroom window just before 6 AM today. Beautiful day, and nothing better to start it than a 8k scull in the Stour in great company!

And now let’s get back to work…