When I first got my car I was a bit surprised for not having any illumination of the heating controls, which can be a problem especially in the Winter, when the days are short and you need to use these controls a lot more!

Anyway, there is illumination indeed, the issue here is that the lighting is designed to stay on regardless of whatever setting you may have on your outside lights. Add to it incandescent bulbs and a horrible procedure to extract them from the panel (more on that later) and no wonder most old Corsas lying around have no functioning lights any more – the owners are coping with it the best way they know, either by turning on the courtesy light or simply by memorising the position of the controls.

Not for me, though! 🙂 – I hate knowing something could be working but it isn’t, but at the same time I hate forking out money on seemingly “little” things (and Vauxhall charges £50+ for the “privilege” of sorting these lights for you!). Hence, armed with some LEDs I got from eBay, my Haynes manual and a few more bits and pieces, I set on trying to sort this out.

Firstly, here is the part in question which holds the lights in place. It definitely doesn’t look familiar to anyone owning one of these cars, as it is buried deep into the fascia: 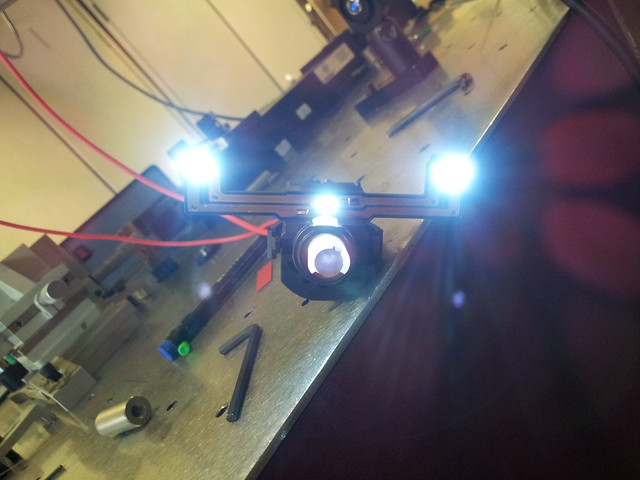 Or, as it sits in the fascia (I took the previous photo as I was testing the lights hooking the part to a 12 V DC power supply), 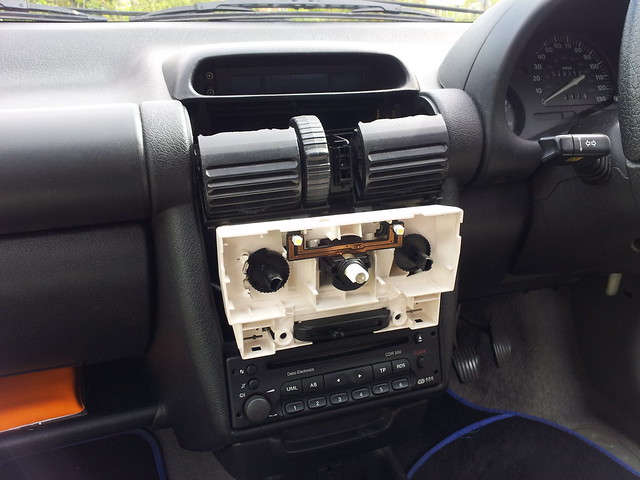 To access this holder all you have to do is follow the instructions from the Haynes manual: pushing the vents down to reveal the screws behind them, which will in turn release the multi-function display on top; and after removing the air recirculation switch and the knobs you can finally get to the lights.

Unfortunately there is something the Haynes manual misses – of these three bulbs only two of them are socketed, given that GM changed the design of this holder in ’97 and with that the central bulb became soldered inside the central switch (the one that controls the fan and the demister). Hence, I had to pry it open in order to get to the bulb, 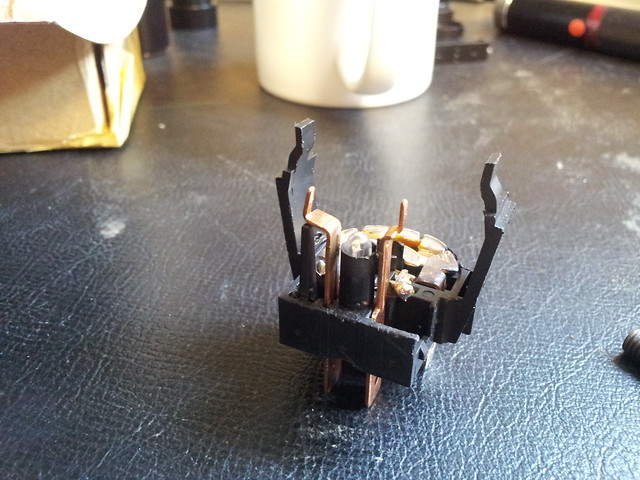 thus separating it from the remaining bulbs, which sit on those two arms: 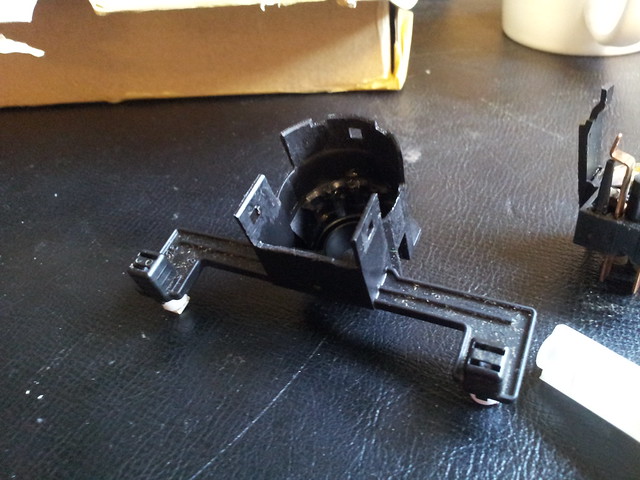 Given that I had intended to replace these lights with LEDs in order to avoid going through this procedure all over again in a year or two’s time, I had to be careful with the polarity. The pins on the back of the assembly are labelled as far as I remember, one of them having a plus sign, hence you can always test with a DC power supply before you take apart half of the car to replace the lights.

My advice – given that you will necessarily have to pry the fan/demister switch open to replace the light, get a used one off eBay or a scrapyard (they should be cheap…) and work on that one – in this way you can just replace the whole unit and be sure it effectively works correctly.

That’s it, folks! Hope you’ve enjoyed the tutorial, I felt I should do one as I kind of missed one when I attempted to do this myself (there were a few images in an enthusiast forum, but they have since been removed…). Any questions, please do ask!

Jazooli web cam prev
Plan for this evening... next