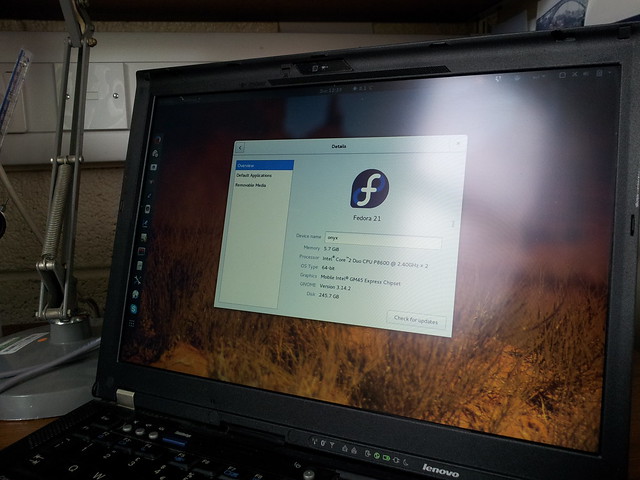 This weekend I finally updated my laptop to Fedora 21. Initially I was thinking about doing a complete clean install but ultimately the usual lethal combination of laziness and too much to do forced me into upgrading it directly using fedup. Well, it did what it had to do (upgrading about 3500 packages, took it about an hour or so including the downloads on the internet connection I have at home) and it all went smoothly without any dramas.

The only annoyance I found (but I had seen it before when I did the clean install of F21 on the Dell) was that Nautilus didn’t have a mimetype association with .lyx files (hence LyX would not even appear on the “Open With…” list, even though I could launch it from the application list). Editing ~/.config/mimeapps.list sorted the problem quickly, though. 🙂

Speed-wise it is more or less the same thing as before (I can’t expect any miracles out of a 2010 Core 2 Duo laptop running on an Intel graphics card, right? 🙂 ), but GNOME is definitely more stable. And some of the things that were giving me a lot of grief before, such as file sharing and navigating through Windows shares are working seamlessly (I even managed to stream content directly to my Raspberry Pi using rygel without having to configure it (other than activating the “Media Share” option in gnome-shell settings). Brilliant work!

Not to mention the updated apps – I am very happy with the latest version of Inkscape, which includes snapping corners and measuring tools! And the inclusion of California, the official GNOME Shell calendar, in the main repositories was also great (I’m getting a bit fed up of the sluggishness of Evolution when it comes to the rest of the PIM apps – e-mail is mostly fine, not to mention it being the only Linux client which can deal with my university’s Exchange server!…).

Well done guys, things are looking great for GNOME! (and Fedora, too…)

I "fixed" the computer! prev
On trail mixes... next